Two like-minded professionals saw the same vision: opening a dedicated aerial space in their town. Meg Johnson Wallace, a University Professor, and Anne Boock Miller, a neuropsychologist, connected four years ago over their common enjoyment of the aerial arts. In March 2015, they decided to co-found Suspend, Louisville’s first and only facility dedicated exclusively to aerial arts and cirque fitness. 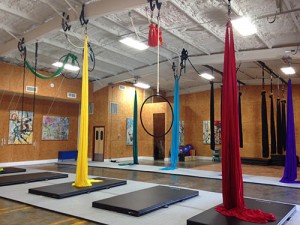 Suspend opened its doors in June 2015.  For only being open about 9 months, their track record is impressive. They have a packed schedule with over 55 classes supported by 8 instructors and cater to approximately 200 students. These two owners have been busy! They joke that opening night was so good that it explains why Meg coincidentally has been pregnant for 9 months, haha! (She gave birth to a healthy baby boy Osborn Wallace Johnson March 10, 2016.)

The dynamic duo have undoubtedly stumbled found the secrets to a successfully run studio, and they’ve given me permission to share some of them with you.

It’s not that they have other careers-It’s that they are smart women! In what she jokingly calls her  “big girl job”, Meg is a professor of Philosophy, with a specialization in metaphysics.

Anne comments of Meg, “I notice that she takes a very discovery oriented approach to teaching. She encourages students to work through problems with the apparatuses, and I think that is why she is drawn most to fabric. She enjoys difficult questions that have difficult and ambiguous answers, and I see that when she performs.”

Anne’s knowledge of the brain translates to how she relates to students. She can work with anyone, of any ability, and it has had a wonderful impact on the culture of the studio. It has even influenced studio policy in indirect ways because she understands how various age groups function.

There was intentional design behind every decision. Let’s take the logo for example.  When they went to choose a design, it was important to them to choose a design that wasn’t feminine (which is all too easy to do when you are a female designing an inspiring logo.) If you take a look at the Suspend logo, you get the sense that this place is for adults and kids, men and women. And their deliberate choice shows in their student population. They have nearly 50% males in many of their classes. (Most studios across the country are over 90% female in aerial classes. Statistic by observation.)

This kind of intentional decision shows up in every detail of their business, to how they label classes, to the way they advertise. I wish every studio thought about their choices with as much clarity of the end goal as these women have done.

They spot every person on every apparatus from day one and continue their heavy support through the learning process (lightening up for advanced students when appropriate). Their safety is further bolstered with thick crash mats under every apparatus, on top of gymnastics flooring (which can be rolled back and easily moved around the room).

While I was at the studio, I got the chance to observe a beginning fabric class. Many studios may spot selectively or let people to explore on their own after they have tried on their own so that people get more time on the fabric. At Suspend, 8 students watch their classmates take their turns on one fabric so that each student can individually be guided and spotted. At first, I thought this kind of spotting was excessive because students get so little airtime, but as I kept watching the class, there was a moment where one person started slipping out of their position. The instructor was right there to catch them and everyone watching was learning more about how to move or not move. 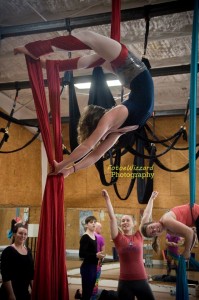 Because Suspend is a heavy-spotting studio, as well as the other choices they have made in setting up their studio, they have attracted people who might not normally fit the mold of who takes aerial. One of my favorite students of theirs was a young girl with Cochlear implants. She was taking class with a young boy with glasses. The young boy asked her what those things on her head were, and her mom explained, “These help her to hear better just like glasses help you see better. In a way, these are like glasses for her ears.” It was such a precious moment to watch. Not only were the children enjoying class, but the parents were right in there, trading off on the hoop as well.

(Notice Anne being her usual encouraging self in the background of the photo! Photo by Kevin Spalding of FotoeWizard.)

Number 4: A Network of Support

They have an amazing support system. Not only do Meg and Anne have each other to lean on for continual support, but they have highly supportive families supporting them. Meg’s husband is a computer guru and has given the studio support for their website. Anne’s husband is a lawyer. He has contributed his consulting skills, including helping with all the proper permits to be up to city codes, etc.

On Suspend’s website, they describe their classes: “Classes are designed to improve strength, flexibility, focus, balance, and poise in a playful and inspiring atmosphere, which encourages health and community.” These goals have been set and they are reaching them. I have witnessed first-hand the wonderful community that they are growing, and I’m excited to see what happens next for them.

For our Video Library Addition:

This sequence is BRAINY! It’s done in palindrome style, which Anne came up with. I think of complicated things, but I wouldn’t have ever thought to do a palindrome. Read more about it in the video library. (See New Releases for March.)

Note: a Palindrome is a sequence that mirrors itself like racecar or 3245423. In this case, it’s a movement sequence. 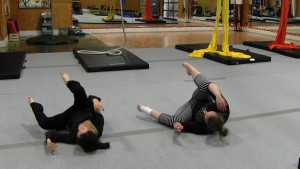 45 thoughts on “4 Secrets of a Successful Studio: Suspend of Louisville, KY”