Ilona Jäntti studied circus at Circus Piloterna in Stockholm and contemporary dance at Laban Centre in London obtaining a master’s degree in choreography. Ilona has collaborated with a diverse range of circus, dance and theatre companies and venues including Shakespeare’s Globe, Royal Opera House, The Place and Darwin Centre at National History Museum in the UK, Circo Aereo and Flow Productions in Finland and Cirkus Cirkör in Sweden. She has been a resident artist at V&A Museum of Childhood since 2010. Ilona has been awarded a three-year Artist Grant by the Finnish Government, starting in 2012. We were lucky enough to snag an interview with her between shows at the 2014 Spoleto Festival in Charleston, SC. Special thanks to Circus Building for hosting the Meet & Greet event.

Q: How did you get started?

A: I started ballet when I was about 7. Then I did rhythmic gymnastics for a little while. That was something I really liked. I’m not sure I was any good, but I just loved it. I hated competing, and I hated the leotard. What I really loved was manipulating the objects – like the ribbon. All the crazy things you could do with it. Then I started dance. I stopped competing and started dancing. I felt like something was missing with the dance—something with objects. When I was 19, I heard of a circus school (in Finland) and so I called them up. I was able to take a class and I knew. I just knew that this was thing for me.  I don’t know how you can instantly know that, but I did. I thought, well, this is the thing that combines the dance and gymnastics and the “something else” that I was looking for.

Everyone else in the class was around 12. I couldn’t climb, so they couldn’t put me in the advanced group (with the older students). I looked more into the school to find out what the requirements were to get in.   I didn’t think they were going to accept me but I got in. I don’t know how. Looking back, it seems like each year, they accepted one person who was a dancer and not as skilled in circus, and I happened to be that one person. I did circus school there for 3 years.

During those 3 years, it was hard. Of course, everyone else there had been doing it a long time, since they were very small. Of course, gymnastics and dance helps, but it doesn’t really help with the strength. It is hard to be really bad for 3 years.  It’s hard to be so much worse than everyone else, like technically.  Mentally as well, it was just really hard. Of course, I am really happy I did it all. After the circus school, I came out very strong. Then I applied to the Laban Center of London. It was a really good thing to do after circus school. I love aerial and all that, but the circus school did not give me that many tools for making something new or creating.

Q: When you travel, do you have other people who travel with you to help out with the one-woman show?

A: It’s really just me. The visa thing is so difficult and expensive. The flight is expensive. I make running the animations/projections not as hard so that I can have the local people run it. If it’s a one person show anyway, then bringing more people, many festivals would likely think that it’s just not worthwhile. And they are right. They have people here who can help run everything.  The show is made up of 3 pieces that are separate. Of course, there are times when I want the set changed faster, but I also need to get changed, so it’s okay. Every venue is different. It makes the show slightly different every time.  The initial rigging part is always nerve-racking. If something doesn’t work out, you have to make something else up and make it work out. Of course it always works out, but it doesn’t stop you from wondering each time if it will all work out okay.

Q: What did the progression look like going towards a one-woman show? At what point did you think you don’t need another aerialist to come in. That’s a lot of strength and energy to sustain for 45-55 minutes.

A: I have performed solo acts as part of larger shows. Then you see how many shows you can put together. At some point, you just realize, okay, I can do this, and can likely do more.  When I have done shows with other people, you realize how much of a break is necessary.  How long of a break do I need? You just keep doing more, gradually shortening the breaks between pieces.

Q: What prompts your creative process?

A: I usually start with the equipment. How can I use it? Then you find something you like. You get an idea and then it leads to another idea, etc. I don’t usually have a story line or anything like that. I study the equipment. For example, I explore all the things I can do with rope and then when I get a collection of all the things I can do, I then put that collection together in a way that makes sense. Or at least makes sense in my head. 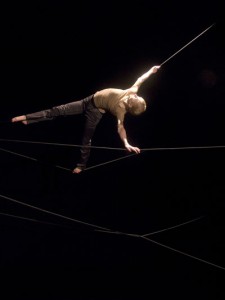 Q: As far as you know, are you the first working with the crossed ropes like you do?

A: As far as know, but of course everything’s been done. I’m sure others have done something similar. The way the idea came about was I was supposed to be working on a hoop. I majored in hoop at the circus school. During rehearsal for the show, there were some ropes around(for rigging) and I was kind of pulling myself up and playing on them. It was connected to the hoop and other pulleys, and I was having fun exploring. And I thought, “Oh, the hoop is not really useful after all.” You have to dare to let that go, let it step aside for the discovery somewhere else. So, I didn’t end up doing a performance on hoop.

Then, I started working on another hoop piece and I thought, “Wouldn’t it be nice if I could open the hoop into one straight line?” So, that’s where the idea for the over-sized trapeze bar came about. So, I still haven’t performed on hoop. It’s nice to have something that you know really well, so that it can be a starting place, but then you get the idea, “Oh, why don’t I just [fill in the blank!].”  I do plan on premiering a hoop piece this July actually. This will be premiered at the Full Moon Dance Festival in Finland.www.fullmoondance.fi

Q: How do you like traveling to new places?

A: Well, to be honest, if I can be in the theater all day, I will. In Finland, if the sun is down, it is cold. Here in Charleston, this is new idea to me that it can be warm and dark at the same time. The warmth feels good. I don’t know if I’m quite used to it, but I think it’s good for the body, you know? It’s been nice to walk around, good for back.
Many times, when we are touring, I find time to create because no one wants to be in the theater in the morning, and so I will get to be there alone and it allows me to really work.

Q: What makes you excited to perform?

A: Well, it’s a funny thing. I’m sure you know. I get so incredibly nervous before a show. Always. It was even worse when I was competing, but performing is still very scary. Before every show, I wonder why am I putting myself through this?  I think, “Why would anyone want to look at this?” It’s been strange to learn that it doesn’t pass. It’s not going to get any easier. But then, after the show, it’s always great. I must love performing. But it feels strange because it is so scary.

I guess if you’re way too nervous about the wrong things, then that would be different and ruin the show. Like, wondering if you’re rigging is bad and you keep looking up or your costume just ripped. I mean, that is different. I guess it shows you care about the work you’re doing. If you’re not nervous at all, then it doesn’t matter. And if it doesn’t matter, why are you doing it?

Q: Do you have favorite memories during your time traveling/performing?

A: There was a small place that was set up as a theater in the round style.  There was a cat that liked to walk around. The first day, the cat came in and sat in the front row. I think because it was warm with the stage lights. The people in the box office came and put the cat out. So, the next day, the cat came even earlier when there were people coming in. The audience was in such a good mood. They were laughing when we did the show and they were actually laughing at the cat.  I thought when the music starts, he would get scared and start running around. But, he just sat there, enjoying the show. I thought this is amazing. What a smart cat. He came early so he could see the show. That was a few years ago. You should always have something like that. It made everyone just so happy because they could all watch the cat watching the show.

Rebekah Leach is always happy to meet amazing performers from around the world who have followed their dream, pursued their passion, and chased after the calling on their life. Hope you enjoyed getting to know a little bit more about Ilona.