Here at AerialDancing.com, we are starting a new chapter of aerial dancing by studying the trapeze. More specifically, we are starting with the single-point trapeze because it is more closely tied to dance, an aspect that we love to include with our aerial. Look for tons of videos (already a huge batch just released!) in our video library over the coming months. 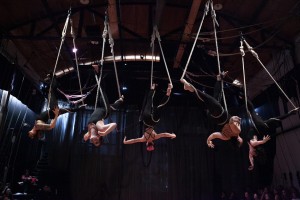 If you are going to study single-point dance trapeze, there is no better place to do it than Canopy. Canopy Studio was founded by Susan Murphy in 2002. Canopy has a rich history as being one of the very first, brave studios in the country to focus on aerial with a recreational, dance approach. Single-point trapeze is not known as a traditional circus apparatus, and this helped the Canopy community to establish itself on the map as a way to approach circus movement from a brand new perspective.

This background in dance was inherited through Susan Murphy who holds a Master’s degree in modern dance from Mills College in Oakland, and is a Certified Movement Analyst through the Laban Institute for Movement Studies in New York City (side note: there are only two other professional aerialists in the country to get certified at Laban Movement Analysts since Susan Murphy).

In 2009, Susan Murphy retired. Susan moved in to her Marsh Studio in Darien, GA, where she currently welcomes aerialists to come and train in her home studio. It is a magical place where many aerialists still find a wealth of inspiration today. 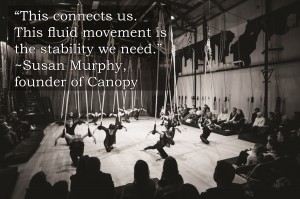 Susan passed on the inheritance to her successor, Melissa Roberts, who is now the Executive Director at Canopy. There is great pride in the lineage and history at the studio. Melissa says, “Here at Canopy, we get to tell the story behind each move that is created, who created it and where it came from. I think students here really appreciate that. It’s not just teaching tricks. We teach history, lineage — a way to value the aerial arts that you won’t find just anywhere.”

At the very basic level, many of the moves came from the long history of traditional circus trapeze. Many of the basic moves are the very same found in Carrie Heller’s Aerial Circus Manual, which focuses heavily on trapeze arts (we no long carry this manual here on our site, but you can still find it on Amazon). But as soon as you get a few months in, you quickly run into vocabulary of moves that were birthed within the confines of Canopy. 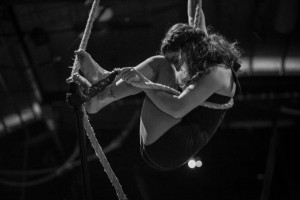 One of the first moves unique to Canopy’s lineage is a move known as Surrender. An aerial teacher, who everyone knows around Canopy as Larry, was creating a tribute piece for a close friend who had passed away suddenly. In her own words, “I was processing his death by being in the air. It helps you look up again.”

Joe’s music was playing and Larry was exploring in the air, improvising as Susan Murphy had taught her dancers to do. She crossed the ropes in a new way, slid down and found Surrender, now a staple move in the Canopy lexicon. And a move you will soon find in our AerialDancing.com library as well!

While not every move comes with such a unique story, hearing these trials and tribulations that birthed beauty helps you to appreciate all that you can do on an aerial apparatus. Every move picked up in the masses comes from somewhere, and it’s of great value when we can teach new generations not to take things for granted. As a result, the community at Canopy is by far one of the strongest aerial communities you will find across the country. It is tight-knit, and well-loved. We are very grateful for the opportunity to be a part of their extended aerial family.

Here is a short clip from the interview with Melissa Roberts, Executive Director at Canopy. She sits in front of a trapeze that was used back in the day, when Susan Murphy first introduced single-point trapeze to Athens, Georgia. These days, they work on carbon fiber bars rather than wood.

Excited to learn more? Watch for the full interview to be released over the next couple months!