This past month, I got to interview Anne McCarthy, who is taking a journey that many across the country are also trekking upon this decade and many more are dreaming of: opening an aerial yoga studio.   Anne is leading a team of yoga teachers as they embark on creating a place for aerial yoga in the South Texas area. Here’s a view into her journey.

Rebekah: How did you get into aerial yoga?

Anne: I started dance in high school and danced through college. In 2002, I tried yoga for the first time. In 2010, I started to study yoga more seriously. It allowed me to find stillness for the first time. After my mom passed away from brain cancer in 2012, I went to my first aerial silks class and have been practicing ever since. When I went to yoga teacher training, I began to combine the two art forms. I remember the first time I did downward facing dog in an aerial hammock. My back felt free and my heart softened. A light turned on within me and I knew that I needed to share aerial yoga in San Antonio.

R: What made you decide to open a studio?

A: I began teaching aerial yoga workshops in 2014. It was really hard to find spaces that would be safe and could accommodate aerial classes. I found one studio and we sold out every class. I knew I wanted to be able to teach more than twice a week. The only way to do that was to open a studio for myself. 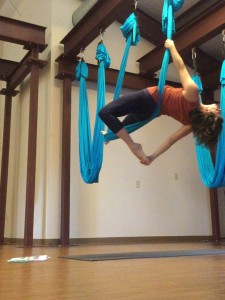 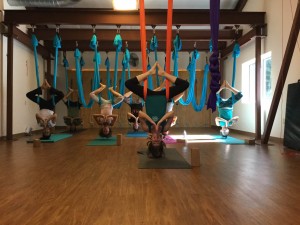 R: It’s always hard to find a space for aerial. How did you go about finding the right space?

A: After looking at many spaces over the last year, I was starting to get discouraged. It is so incredibly difficult to find a place with height and an amazing ceiling.  I kept teaching a workshop series twice a week.  Then in March, things just lined up. I serve on a board for a non-profit yoga school that was starting a capital campaign. One of the other board members brought up an existing yoga studio for sale.  I had been once and remembered a big i-beam that I thought could be perfect for aerial yoga. The space had this wonderful quality to it, truly something special. There is just this amazing energy to it.    Another board member, Desiree, lived nearby and was also interested in the studio.  We met and within 3 weeks made an offer on the studio.

R: How did you go about making sure that your space is ready to handle aerial loading?

A: My aerial teachers, Julia Langenberg and Laura DiPasquale, put a huge emphasis on safety and taught me to ask lots of questions about structures. Julia put me in touch with an engineer that she had used for her aerial studio.   I had the engineer out to the studio and learned that it was a prefabricated metal building with z-purlins off the ibeam.   I learned that these metal buildings are not built to support extra weight besides the roof and the required safety factor.   I thought we were going to be able to it, until the engineer recommended a free standing structure inside the space.   Then we started the next part, trying to get it right.
From my teachers, I knew that in aerial the standard is a 10:1 safety factor and requires at least 2,000 pounds of dynamic weight per student.  With aerial yoga, I believe a lot of people think you can lower that standard.  However, in my classes, I know we swing and flip into the hammocks.  That is a lot of movement for many people all at once.   I wanted to maintain that level of safety for my students.
We ended up with an engineer that had been a performer at SeaWorld and worked for SRO Associates, a theatre production company who builds the sets and designs shows for many places.   So when we began, everyone had some understanding of the unique needs and types of dynamic movement produced by aerialists and aerial yogis.   I worked with them to come up with good spacing and layout for our studio and then had the engineer run the numbers and create the official design.   SRO has a metal shop and was able to build it off sight.   It was amazing to watch them load in 500 pound i-beams and see the structure go up.   We have 18 student hammocks and an instructor hammock.   The engineer designed it so that everyone can be swinging and flipping at the same time.  It is such a great feeling teaching in a space where I know beyond a shadow of a doubt that the rigging is all held to that standard of 2,000 lbs of dynamic movement.
The following is a time-lapse video of the internal rigging being installed. (Aerial teachers everywhere share your excitement!)

R: What sorts of surprises have you encountered in the process of opening a studio?

A: It has been an amazing learning experience. I looked at spaces with wood beams and talked to engineers and knew it wasn’t possible to rig that many students safely from wood. Before this, I never would have questioned rigging off an i-beam. I thought all i-beams were created equal. I have learned that there are so many elements to look into. (When the building was designed, what safety load for the roof was included – did they just meet the basic safety requirements or go above, does it snow and add more weight to the structure.) Now that we have a freestanding rig in the space, I feel like this is a wonderful way to rig. It allows everyone to see the structure and understand what they are hanging from.

R: Tell us more about your team.

A: We have an amazing team. Besides myself, my partner Desiree Whitney is also a certified yoga teacher and did aerial yoga training this summer. The yoga school we studied at (the Esther Vexler Yoga School) focuses on Iyengar style yoga with lots of props and modifications.  So for our style of yoga, the aerial hammock is another prop and makes yoga so much fun! We also have an amazing group of traditional yoga teachers: Michelle Bowles, a yoga therapist, Debbie Pedersen, a certified Iyengar yoga instructor, Tricia Messinger, a thai massage yoga teacher, Donna Foster, a power yoga instructor, and Cathy West, a vinyasa teacher.

R: What is the name of your studio and how did you decide on the name?

A: Aerial Yoga Boerne. We really debated over several variations. Boerne is a small town 15 minutes north of San Antonio where the studio is located. We are the only full yoga studio in the area. While we have many styles of yoga, we know aerial yoga is rare and wanted to highlight it. In the end, we kept it simple to describe what we do and where we do it. 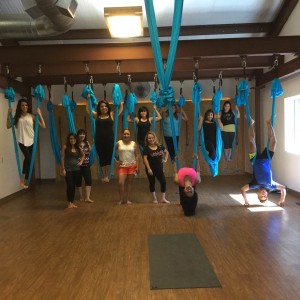 R: What do you love about the aerial arts?

A: I love the way aerial arts focuses me. When you climb the silks, it’s the only thing you can think about. I found it to be a form of mediation, keeping me fully present in every moment.  In aerial arts, you must fully focus your attention to keep you safe. I also have never had strength. Through training, I see myself become stronger.  I love that aerial arts blend together dance, strength, and grace.

R: Who are you most excited to teach?

A: I love teaching students who are new to yoga and aerial. The feeling of flipping upside down for the first time is incredible and I love sharing that with people who don’t think they can. I love watching the growth as they find strength.

R: What is one thing that’s got everybody talking about your studio?

A: Besides the fact that we have an amazing rig for 18 students?! We also have yoga rope walls, tons of props, amazing teachers, and a beautiful space. There is something special here. When you walk in, you know you are in a warm and welcoming space. 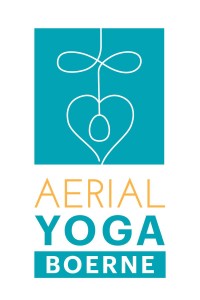