As aerial grows, more and more options for training are cropping up. For those of us addicted to our air time, this is EXCELLENT news! Dozens of aerial retreats have cropped up, and while we might want to attend all of them, our pocketbook can get in the way.  At Born to Fly, we want to start gathering information from retreat attendees to help students to identify what retreats are available and the best fit for their goals. This first review we have is on the Dances in the Air Costa Rican Aerial Dance Retreat written by Salt Lake City aerialist Morgan Sjoblom.

What was the focus of the retreat? What was the kind of content covered?
The apparatus focus was on fabrics (some low stretch and some medium stretch) and trapeze (mostly static with one dance trapeze). Every day of the retreat there was a 2.5 hour class of trapeze and a 2.5 hour class of silks. Intermittently throughout the week, there were also other movement classes such as juggling, hoop, yoga, and meditation.

There was a large focus on movement and exploration in the air and on the ground. The exploration wasn’t particularly on skills but on everything as a whole. Considering the ground, the apparatus, your emotions, the emotions of the songs, changing/breaking movement patterns, and not holding yourself to what you think should be done. Each class incorporated these aspects as well as learning skills. The week of classes all built up to a sequence for each apparatus.

What type of professionals were brought in to teach?
Dance in Air is owned by Melissa Coffey who is an aerial performer, trainer, and producer. During the week she taught the upper-level trapeze classes and the lower level fabric classes. Also there teaching was Amber Monson, who is also an aerial performer, trainer, and studio owner of Sky Gym in Atlanta. Amber taught the upper-level fabric classes and lower level trapeze classes. 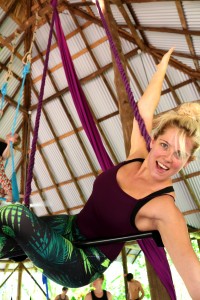 What was included in the cost of the retreat? 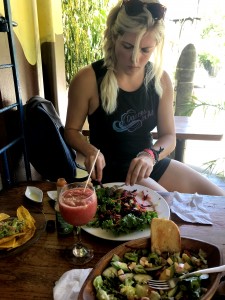 What information can be provided about the location of the retreat?
Melissa did a really great job finding a location that was secluded and yet close to the nearby town. It was amazing to be in a remote location and still have access to everything you needed. Part of the training took place at the resort where lodging was, and part of the training was at another location in the nearby town about 10 minutes away. The resort was really a small oasis that had wonderful bungalow style rooms, an outdoor dining area (where all the meals were served), beautiful plants and animals everywhere, a pool, and within walking distance to the beach. It was a safe location with many locals and many cute fluff balls (dogs) running around that all wanted loves. 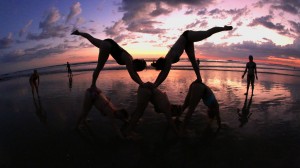 Did the retreat have multiple skill levels or focus on a single skill range?
There was a large variety of skill levels present. There were many people who had never done aerials and many who were at higher levels. There was a great mix and the lessons were catered to everyone there. It was great to be there with mixed levels and watch everyone progress throughout the week.

How customizable were the class options?
During the retreat, I shared my thoughts about wishing that there was more dense skill coverage. After I did, there was a whole lesson planned just focusing on skills. The trainers really wanted to provide what the students were looking for and were open to ideas and suggestions. I enjoy working with all types of movements but when I’m with a new instructor I also want to pick their brain and learn all the skills I can. 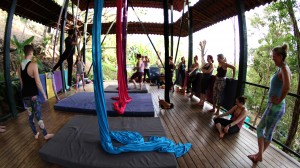 What was the social ambiance of the retreat? Inclusive or segregated?  Social activities in addition to training?
This retreat is hosted by trainers who live in Atlanta, GA. So, by proxy, there were many people there who knew each other from that area. That being said, the retreat was run in a way that fostered connections and communication. During the non-training times of going to the beach, out on excursions, and hanging out at the pool it was relatively easy to meet someone new and connect with them. 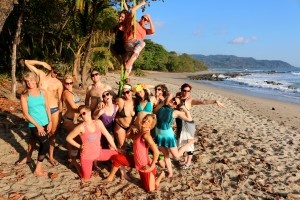 Did the retreat include destination excursions?
Going to Montezuma for the day was one of the biggest excursions. Included with that day was travel as well as hiking to a nearby waterfall. There was time to go shopping, go to the beach, eat dinner, and zip-lining! Which I did! There was also a morning that we went surfing, a morning free for horseback riding, and daily walks to the nearby beach. 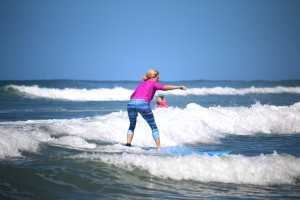 What was the balance of training and rest?
The day to Montezuma was meant to be a rest day. Although most of us chose to do as much there as we could. Go figure, a bunch of aerialists taking advantage of every opportunity! The general theme of the retreat was going at your own pace. There were a ton of class options and you could do as much or as little as you wanted. No one was pressuring you to do everything and no one was stopping you from doing everything either. It was up to you to use accurate self-assessment and go at a pace that was right for you.

What was your favorite highlight of the retreat?
I loved the experience of training outdoors for a week and training with brand new people. I also went on the retreat with my Mom which was the biggest highlight. I took her to an aerial class two years ago and now we are going on aerial retreats together!

It was also amazing that the place we were training silks at had rigged a silk at the beach while we were there. It made for a beautiful beach photo shoot, one of my aerial dreams. That part wasn’t even a planned event. Which often was the beauty of this retreat. It was planned but not over planned. There was room to do what you wanted and flexibility to take opportunities as they arose. 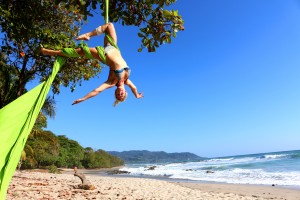 Any areas of improvement?
I really feel like this was about as well rounded of a retreat that you could get. The only aspect I would mention is that if you are looking for an all training focused retreat this may not be for you. This was one aspect I was a little bummed about, at first. But like I said before, once I mentioned this to the trainers a lesson plan was made the next day focusing on the things I had asked for. I wanted to train harder and when I mentioned it, it was delivered! This retreat was focused not only on aerial training but also enjoying the location and all it had to offer, which was a lot! So if you’re looking for an aerial training and retreat, this is a perfect option.

Final Comments:
I loved this retreat and I will definitely focus on being able to go again. Melissa is always looking into more locations to hold retreats and has a list of great locations for aerial retreats. She is really great at communication and was very helpful in the booking process leading up to the retreat and then answering questions while there. She really figures out all aspects of a retreat that aerialists specifically need, like good healthy food and rest in addition to training. 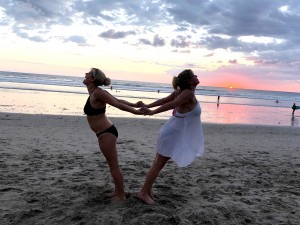 Morgan’s journey into aerials started in 2011 while attending Georgia State University. She only dabbled at first because of time constraints with school. In 2013 she finished with a BFA in Graphic Design and shortly after moved back home to Utah and started taking every aerial class she could.

In 2015 Morgan started assisting aerial and AcroYoga classes. Focusing on proper spotting techniques and learning all she could from all of the Aerial Arts of Utah staff. From 2016-2017 Morgan completed three Aerial Instructor Training Programs (beginner, intermediate, and advanced) from aerial instructor and performer Elizabeth Stitch. From 2015-2016 Morgan studied and trained AcroYoga with Kimberly Preston, certified both as an AcroYoga International Teacher and Yoga Instructor with over 1,000 hours of Hatha and Vinyasa teacher experience.

Morgan started teaching on her own in 2016 and has loved all of the moments and learning experiences she has experienced. Along with her foundational training in aerials and AcroYoga, Morgan’s training in fine arts greatly influences her passion for silks, trapeze, lyra, and AcroYoga. She loves finding balance in the shapes, expressions, and movements on an aerial apparatus. Morgan has an everlasting fascination with the endless possibilities of creation. She finds inspiration from all areas of her life and loves sharing aerials with her students, friends, and community.