This Fall we are all about Rope (a.k.a. Corde Lisse) here at AerialDancing.com. We’ve been uploading new Aerial Rope videos to our site. Now and then we like to release one of our videos so that everyone can enjoy the in-depth coverage of common aerial moves ~ see the end of this article for a video covering the progressions of the hip key. These progressions are not “THE” progressions. They are simply A way to approach different points along the pathway of mastering the hip key. There is a lot to absorb. For some items, take or leave ’em, but we hope you learn something new about training the hip key!

If you love the depth of these articles, you will love when the Rope Manual Volume 1 gets released 2015! 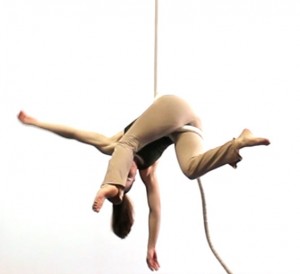 Progression 1: Hip Key From the Ground

The first task is to allow the student to feel what it feels like to be in a hip key. A common misconception is that the hip key is a locked in knot, or at least is a lot more secure than it really is. As a teacher, you want them to understand that it is their body placement that holds them and will be controlling the tension. If they move their hips towards the ceiling, they will fall out of the hip key. Many beginning students are surprised by this fact because they have seen everyone hang out in a hip key as if it’s a footlock-type secure knot.

When teaching, you want to give students chewable bits. There is a lot to the technique of the hip key, but the first thing I want them to be concerned with is as basic as possible. Once they weave the rope under one leg and over the other, I want them to try to meet their outside hip to the pole of the rope. It is important to cue the hips. If you just cue the body, as I’ve seen inexperienced teachers do—“Lean over” they’ll say—then some students won’t get the hips all the way over as they lean with their head and rib cage. They will fall out and be confused as to why they are not staying in the hip key. It’s called a hip key for a reason.

Progression 2: Work on Tightening up the Hip Key 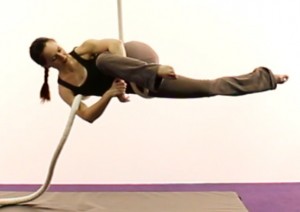 This can help a teacher troubleshoot for students who are sliding out, but it applies to everyone. In the hip key, if you bring the top leg forward (towards the nose) while the bottom leg moves away from the torso, you will tighten the hip key. This also puts the body in a position to better use the obliques which in turn helps lift the torso and you can maintain what I call the “lifted hip key.” More on this as we progress.

Progression 3: Add a Rope Over the Shoulder

Now, this is an interesting progression because in some ways it’s actually a regression. But, hear me out. Adding the rope over the shoulder gives more tension so a beginning student will be able to get into the hip key and be in the position with less effort. This is a great modification for the first time you teach a hip key from the ground. Some teachers start with this from the get-go. I don’t like to and here’s why: It’s like training wheels. There are many students who don’t need them. They are fine with the simple, straightforward hip key from the start. As a teacher, I like having a back-pocket tool to be able to help break-down a move if it’s necessary. I don’t need to start at the most basic level for every student. Not every student needs to be that babied.

Progression 4: Work on Controlling the Level of Tension/Squeeze

The next task that I give students is to see if they can fully control a descent all the way to the mat by controlling the level of tension at the hips. If they move their hips towards the ceiling (the movement is so slight, it’s hard to even call it a movement), they will start to slide. Pulling back in towards the rope will tighten them back up and put the brakes on. At first, you will see that students can slide, but can’t put the brakes on! That’s all part of expected learning pathway. It is one thing to let the tension go. It is quite another to let it go with control so that you can get it back in a moment’s notice. I want students working on this level of control before they move on with their hip keys.

There is also another hidden technique that can start to be revealed at this last step. It helps to be in a “lifted hip key” as you slide to the mat so that you can hover before reaching the mat. If you are in a regular hip key, with the head hanging down below the hips, the head will hit the ground first, and it’s not so fun. If you encourage students to maintain a lifted torso, so that the torso remains above the hips, they might find they can control their tension level and feel like they are able to get the feeling of hovering. This will prepare them fabulously for future hip key roll ups. If they are mastering this step, you have had great success with teaching hip key technique! So far, so good.

Progression 5: The Pathway of the Legs

Once students have control of the hips (demonstrated by success at the fourth progression), I feel comfortable moving on to teaching how to control the rest of the body. The next focal point will be the legs. As an aerialist enters the hip key, it is nice to see the clean technique of straight legs that draw the widest, biggest circles they possibly can through the air as the legs circle into the hip key like the hands on a clock. To help them do this, I like to use the rope over the shoulder and start with a solid grip of the knee on the rope. As soon as they are ready to go, there is a very key moment that I look for: The inside leg presses forward (with a beautifully straight leg) so that the rope slides up to land under the gluteal fold. With the rope tucked nicely in this position, the outside leg reaches out first and then up and over into the hip key. The focus is the pathway of the legs. If you don’t emphasis the pathway, these students will end up the way many amateur aerialists have in the past – with very flat hip keys that lack the buoyancy and life that they could have! Set up good habits now.

In the fifth progression, I emphasized the leg reaching. It helps to have a straight leg so that the reach is visible; however, the reach isn’t really happening in the legs. It really happens in the hips. So, now I don’t care if they go back to entering the hip key with bent legs, but I want to see the space get created, and then get sunk into. In this step, the task I give is to start with a high knee squeezed onto the rope and then repeat progression 5 but without the rope over the shoulder. If they squeeze the knee high on the rope, it’s really easy to slip the outside leg under the rope; this leg lifts so that the rope slides into the crease of the body and then hips (or the leg if it helps) reaches out & up & over as the student rotates into the hip key. Like it was addressed as progression 5, the leg on the rope pushes forward to ensure the rope lands right under the gluteal fold during this whole transition. You can see why it’s important to give a bit size chunk to chew on each time you address hip key technique. There’s a whole heck of a lot to think about!

So far, we’ve addressed the hips, legs –which really was more hips – and now we are ready to move on to full body integration. This mainly involves the biceps and side body. To get the party started, let’s start with leg swings to the side. From standing on the ground, grab the rope and swing sideways with your outside leg going behind the rope and the inside leg going in front. This is to prepare for the scissor action that is about to come. What you want to look for in the swings: The rope should meet with the top of the thigh of the outside leg (the one that’s swinging behind). Once the rope gets as high as possible between the legs, you are ready to swivel those hips into hip key. 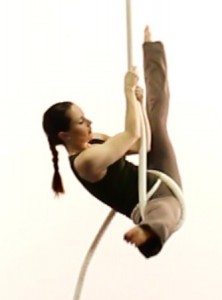 Once this scissor action is taught, it is common to see a student lose everything they learned about hip control of the hip key. If a strong foundation is present, it won’t stay lost! (This is why progressions and building foundation is soo important.) Remind a student to press the inside leg forward to get the rope under the gluteal fold (not under the knee!), and lift the outside hip high as you go around to get the rope at the top of the leg. Work on getting the second leg as high as possible as you go around. You can give students the visual goal of trying to tap the rope with their toes as they circle around. Encourage them to reach reach reach for a circle of the legs as wide as possible. Push students (gently) to their limits so they can do their best! 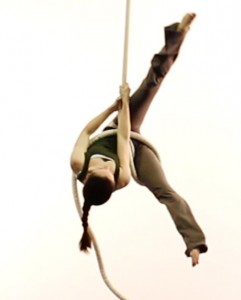 The ultimate test of hip key technique is to stop in a full inverted straddle, windshield wiper over into meathook with the rope tight enough so that you don’t slide too much as you sink into the hip key position you are in. By the way, this is an excellent prep for meathooks. I save this progression for advanced students who have been working on hip keys for a long time. Don’t teach this one to your beginners!

Progression 9: From the Air – Start Easy

We’re almost there! We’ve done all the ground work we can do. Now it’s time to take to the air! At first, only allow students to do one climb. They are still new at this, and you don’t want them too high. After one climb, the first leg comes around; you can either hook your knee on the rope OR you can use this opportunity to grab the rope with your feet and help place it over your second leg. This is easy in terms of strength, but hard in terms of technique. (You may have seen this move featured in my fabric books. I elaborate more on this technique there. )

Progression 10: Put it all together

The last task is to windmill those legs into the perfect hip key, and demonstrate full control of the hips as you slide down the rope, starting and stopping on command. Congratulations! You have made it through the hip key progressions. If you fully took advantage of what each step had to teach you, your hip key should be pretty darn amazing!

Here is the video demonstrating these progressions on rope (can easily be transferred to fabric):

3 thoughts on “10 Progressions of the Hip Key”