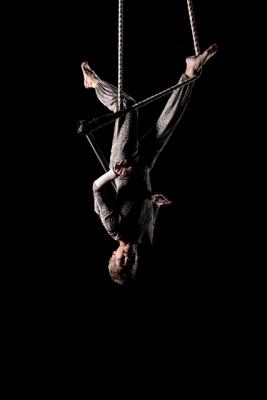 Susan Murphy and Don Carson together have created an Authentic Aerial Theater and Training Center like no other. The Marsh Studio offers aerial act creation retreats, workshops, classes and performances for aerial artists of all levels and aspirations. Located just outside of historic Darien, GA on the beautiful coastal marshlands. A quick hour and fifteen minutes from the Jacksonville International airport and just fifty-five minutes from the Savannah International airport. The Brunswick, GA regional airport that is serviced by Delta airlines is a quick 25 minute drive. Susan Murphy began studying low-to-the-floor dance trapeze with Terry Sendgraff in Berkeley, CA in 1978. Susan holds a Master’s degree in modern dance from Mills College in Oakland, CA and is a Certified Movement Analyst through the Laban Institute for Movement Studies in New York City. Moving to NYC in 1983, she continued developing trapeze as fitness, self-expression, and performance art, performing at Lincoln Center in 1988. After moving to the San Francisco Bay Area in 1990, Susan continued teaching kids and adults and performed at the Cowell Theater in San Francisco in 1994. She taught modern dance at the University of Georgia from 1999-2002. In 2002, Susan and her husband Don Carson, envisioned and built Canopy Studio, a community aerial arts center in Athens, GA. Susan served as Executive Director of Canopy until she moved to the coast of GA in 2009, where she and Don have built a state-of-the-art aerial dance studio by the marsh where she is now holding weekend retreats. “As Founder and former Director of Canopy Studio (an aerial arts and performance center in Athens, GA), I’ve had the opportunity to work with dancers and students of all ages, skill levels and choreographic interests. Having been Certified as a Movement Analyst (CMA) from the Laban/Bartenieff Institute of Movement Studies in New York City, I have been integrating the principles of Shape and Effort analysis in my teaching and performing. I have also been teaching workshops and doing private coaching at the New England Center for Circus Arts, Founded and Directed by Elsie and Serenity Smith in Brattleboro, VT for the past 6 years.”